Change rules the world, sets the course, and turns the page. It is the universal constant, at the atomic level to the continental level, and all aspects in between.

One of the most widely studied changes in the natural resource world are those of plant communities. The causes of such changes are multivariate and share common denominators: anthropogenic, climatic, and biological, and a near infinite combination thereof. One of the best ways to document such changes is through the use of photo points. For example, a photo is taken in 1912, its location is explicitly documented, and decades later, a photo is taken again from the same vantage point. Many changes are not surprising; others are.

A unique aspect of the Desert Southwest is that even though the plant community changes within various landscapes have been great, there is still an expansive landscape through which to view, monitor and study such changes, unlike other areas of the U.S., such as the Midwest, where nearly all native plant systems have been exhaustively converted to intensively-managed agricultural systems.

Brandon Bestelmeyer, a research ecologist with the Jornada Experiment Station in New Mexico posted such photos on his blog. Have a look here: Back to the Future 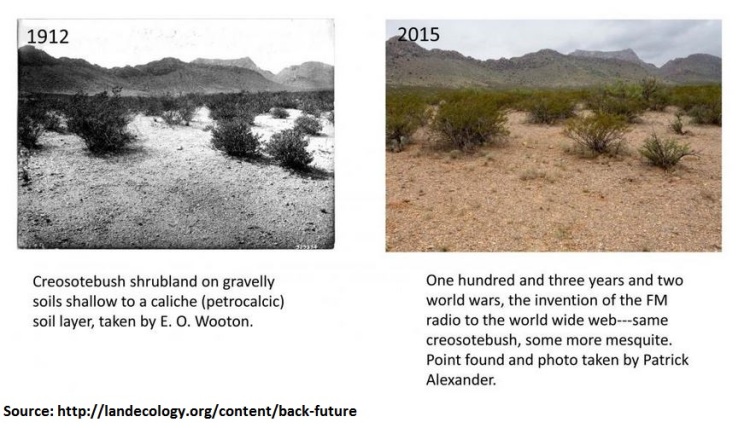